It is easy to find your way when driving to El Cotillo from Fuerteventura airport as the roads are well signposted and there is generally very little traffic.

If you are arriving after dark, and a little apprehensive about driving, then you may prefer to take the new road (avoiding the mountain road) which is the second route below. It is slightly longer but generally easier.

It will take you approximately 40 minutes to drive from Fuerteventura airport to El Cotillo via the most direct route and probably 50 minutes or so via the new road.

Anyway, how to get to El Cotillo from the Airport:

Both routes (the first bit is the same)

Assuming you are picking up a hire car at Fuerteventura airport, rather than from one of the car hire firms located outside the airport, when you exit the terminal from the main hall after picking up your car keys you will see a raised area in front of you. The hire car’s are located up in that area so take the stairs (or a slope) and then find your car which will be in the parking spot number shown to you by the car rental agent.

Drive to the hire car parking exit and the barrier should automatically raise without you having to do anything. When you exit move across to the right hand lane and carry on until you reach the roundabout. You will be turning left at the roundabout but stay in the outside lane of the roundabout as you go around (read my Tips for driving in Fuerteventura) and as you exit the roundabout take the right-hand filter lane which is signposted to Puerto del Rosario.

This road is the Puerto del Rosario (the capital) ring road. This is where the routes differ. If you intend taking the direct route then carry on with these directions, otherwise jump to the “Via the new road” section.

The most direct route (via the mountain road)

Don’t let the fact that this goes through the mountains put you off – it is still an easy drive.

Go past the first exit on the ring road and at the next exit, signposted La Oliva, take the slip road up to the roundabout.

Turn left at the roundabout (3rd exit) signposted to La Oliva onto the FV-10. You will drive past the two petrol stations and proceed up the hill.

Basically, for the next 21km (13 miles) you just need to keep going straight on at the few small roundabouts you will encounter. You will pass through the villages of Tetir and then when you are up in the hills you will pass La Matilla and then drop down again. You will pass the village of Tindaya on your left and continue on. After you go through another series of bends you will drop down towards La Oliva.

As you reach the outskirts of La Oliva you will approach a junction to the left which is signposted to El Cotillo. So turn left there (you will immediately pass a DISA petrol station on the left) and continue.

After approximately 8km (5 miles) you will come to a roundabout with an exit to the right to Lajares. You go straight on to El Cotillo.

After 6km you will go though the village of El Roque, which is just outside El Cotillo. Another half a kilometre and you will enter El Cotillo.

Relax and enjoy your stay.

Via the new road

Follow the directions above from the airport until you get onto the Puerto del Rosario ring road. Then, instead of turning off the ring road, stay on it all of the way around Puerto and follow the road northwards up the coast towards Corralejo.

Go straight across the first roundabout by the Mercadona supermarket (on the right) and again at the next two roundabouts go straight on keeping to the FV-1 road. At the next roundabout turn left, away from the coast, and signposted to Corralejo and Caldereta.

At the next roundabout take the slip road right onto the new dual carriageway.

Stay on this road to the first junction which will be signposted to Lajares. At the bottom of the slip road turn left at the roundabout and go under the flyover. At the next roundabout go straight over (2nd exit) to Lajares.

Drive straight through Lajares, going straight over the roundabouts at the start and end of the village. At the next roundabout take the first exit right to El Cotillo.

After 6km you will go though the village of El Roque, which is just outside El Cotillo. Another half a kilometre and you will enter El Cotillo.

Relax and enjoy your stay.

Whichever route you chose for driving to El Cotillo from the airport you will find driving easy and relaxing here. 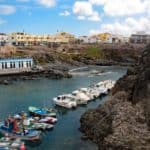 The new harbour to be upgraded