A few weeks ago a new sign was erected in the main street (Calle 3 de Abril de 1979) near the end of the football ground and outside the Riders – Surf n Bike shop.

La Oliva Ayuntamiento have been placing similar large “sculpture” type signs around most of the towns and villages in the region over the past year or so. They can be found in Corralejo, Lajares, Villaverde and La Oliva and maybe more.

El Cotillo is one of the last to receive one and it is a rather unique sign as it is multi-coloured (a blue “El” and a white “Cotillo”) whereas I think all the others are just white.

The El Cotillo sign seems to have sparked off much controversy as some people like it and others really hate it. Personally I neither hate it nor love it. It is a bit of a strange place to put it though. 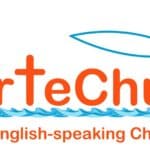