I went to get my haircut in El Cotillo so decided to go for a walk around the village to see what bars, restaurants etc were open during phase 1 of the lockdown easing.

I have to say there were fewer places open that I thought there would be and also fewer people about. When I went to Corralejo a few days before it was quite busy, relatively speaking.

As well as the supermarkets there were three bars open that I could see. The La Morocha Parrilla and Tapas bar under the Marfolin Apartments which was very busy. At the other end of the apartments Bagas bar was open. In the old harbour the Coyote Bar was open.

Nothing in the new harbour area was open.

The Cotillo Beach Hotel Terrace bar has been completely gutted and is being redeveloped while the hotel is closed. It will be interesting to see what it is like when completed as the old bar was a bit like a school hall. 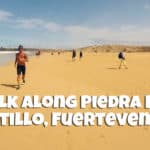 A Beach Walk – for those missing it

A short update on the current situation