Update on the Building Work in El Cotillo

As many will know, there are a few large building projects going on in the north of El Cotillo, in the area in front of the Coral Cotillo Beach Hotel and the Marfolin Apartments.

All of the pile hammer action has finished on the first project, which will be an apartment development with a swimming pool, and they are now building the actual apartments themselves. There is a large crane moving building material around.

There is obviously plenty of associated building site noises and dust which can’t be making life in the apartments that overlook the site very pleasant.

The second site is in front of the hotel. They have almost completed excavating the giant hole that I assume may house underground parking. But I actually don’t know what this development will actually be since there is no notice up on the site as there is for the first one, at least not yet. I am simply assuming it will be another apartment complex.

I imagine the Coral, the new owners of the Cotillo Beach hotel cannot be too pleased. They have only just reopened after spending a great deal of money upgrading the hotel to a 4 star.

I imagine the noise etc must be putting people off staying at the hotel, particularly if you end up in one of the hotel rooms that overlooks the building site.

As well as the noise the hotel will also be losing much of its distant sea view. Mind you, I have always thought that calling it the Cotillo Beach was a little deceptive as it implies it is situated on a beach, which of course it is not.

The first time my wife ad I stayed in El Cotillo we spent the first 3 nights in the hotel, as the apartment we were renting wasn’t available until then. That was in 2007 I think. The hotel only had 6 rooms occupied so it was a little like the Marie Celeste.

It was very cheap though as I think we only paid about 30€ a night all-inclusive for both of us. But after the first night we didn’t eat in the hotel as they put the food out for the 6 rooms at 6:30 so if you went to eat at say 20:00 the food had been sitting under heating lamps for 1.5 hours. We went in the bar one evening for a drink before we went into the village to eat. There was no-one in the bar, not even a barman, and no music or anything. So we sat at the bar in this empty, dead-quiet room until the barman came out of the kitchen and served us in plastic disposable glasses.

Not a great experience, but it has certainly improved since those days.

I made this short video of the building work so far if you are interested in watching it. 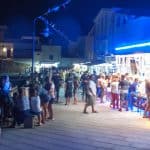 FEM Music Festival – Will it happen this year? 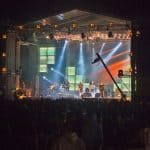